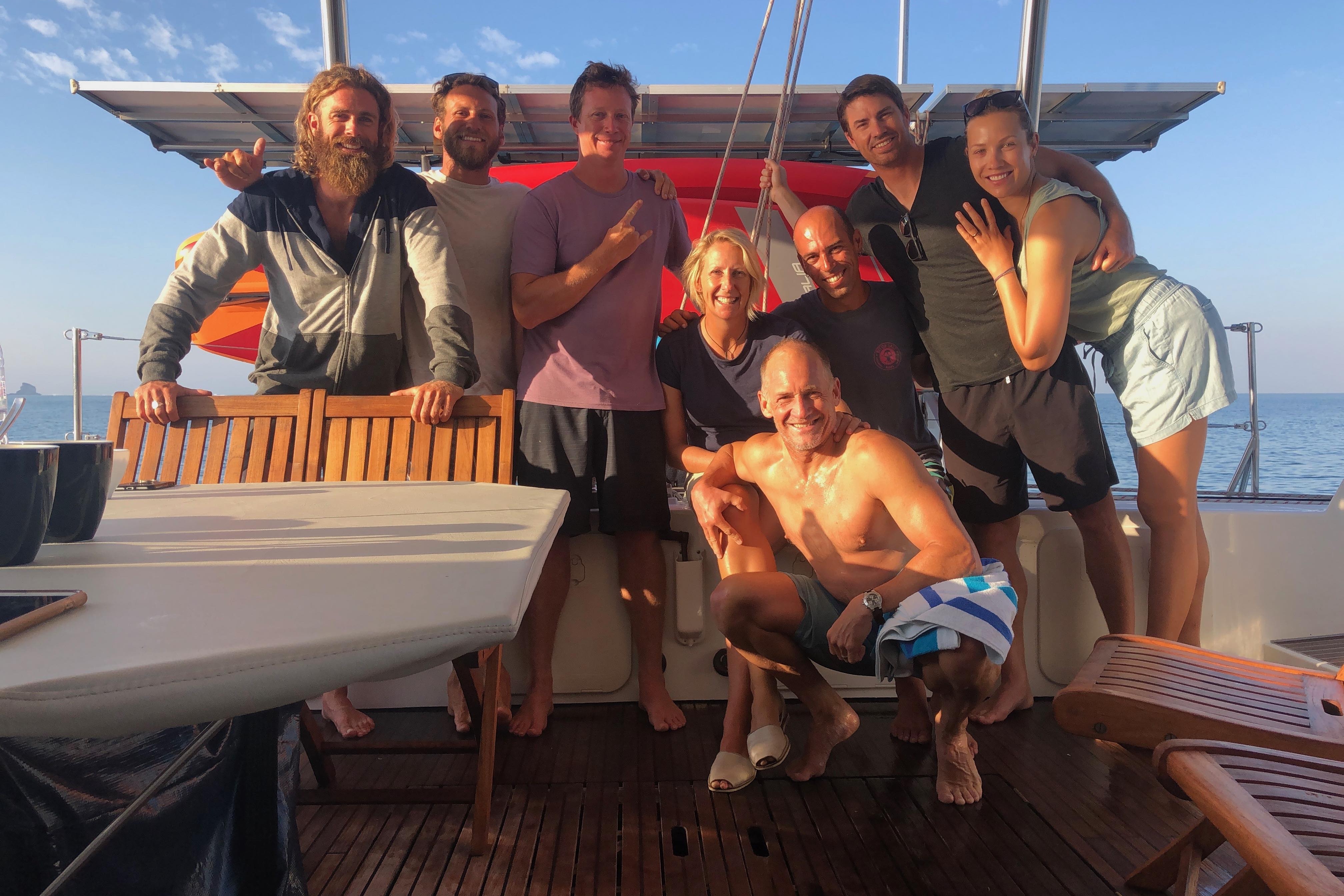 Discovery had been exploring Sumbawa and its surrounding islands for nearly three weeks. Sumbawa had been good to us, but to be honest the crew was ready for a change of scenery. It was the start of a new trip and after two days of surfing reliable Lakey, I asked our guests if they were keen on a bit of adventure. Without hesitation and barely any questions they all gave a grinning nod, after all, raw adventure is what the Quest is all about! Our skipper Andrew was a mad keen surfer and itching to show us the goods. It was a solid all-night trip, but the horizon can’t be ignored!

We stowed the kite gear, battened the hatches and pulled anchor off the shoulder of Nungas, the break we’d spent so much time surfing. With a little prawn curry in hand, curtesy of Chef Jason, we hoisted the sail and set out on the 65 mile crossing to Sumba.
The last time Discovery was in Sumba was 10 years ago. I was stoked to come across a scene that was exactly as described in Gavin’s logs nearly a decade ago. The isolation was more than welcomed by both crew and guests alike. The water was blue, a nice change of pace from the milky waters of Sumbawa, and the landscapes were breathtaking. Lush mountains, steep cliffsides, pealing lefts around every corner… it was about as picturesque as it gets. Just as the novelty of the new scenery started to subside, Mother Nature put on a show as if to say “hey, you’re not done appreciating me yet!” It started with one splash, then two, then fifty. Before we knew it, Discovery was surrounded by hundreds of dolphins, cruising next to us with ease and grace as we sailed towards our next anchorage. Our new friends disappeared as furtively as they came, leaving us alone to take in the utter solitude Sumba had to offer.

Unfortunately adventure doesn’t always go as planned. Its not always rainbows and dolphins (although we do get both pretty often!). It was day 7 when the water maker began to give us problems. Let’s just say you never know how crucial systems like this are until you lose them- whether it’s showering, brushing teeth, flushing toilets, washing the boat, drinking… we need fresh water for just about everything we do onboard Discovery. The chef and I spent the mornings trekking back and forth to the boat from the local village at our little private surf break filling the water tanks with 15 gallon jugs. It certainly wasn’t ideal but we made it work until we got the water maker back up and running. Times like this are inevitable on a boat but fortunately we got plenty of pumping surf to lift our spirits.

It was hard to stay annoyed when we came around the corner of the island to find an empty point break, barreling left in some of the clearest water we’ve come across in Indonesia. We surfed until we couldn’t feel our arms. Chef Jason nourished us back to life with a little lobster and strawberry grouper brought to us by a local fisherman.

The days that followed developed into a lovely routine- rise with the sun, eat something incredible, surf until we’re hurting, nap, surf some more, eat some more then crash. It’s a schedule we all knew we’d miss desperately the moment we had to leave.

When I thought about the most memorable part of our time in Sumba I noticed a theme arising from each of these expeditions. It’s always the locals. Getting to know them, learning from them, and experiencing their way of life will always be the highlight of these journeys, no matter how incredible the waves and wind are. The Tau Humba of Sumba were kind and welcoming. They showed us how they celebrated their past and even had us help them build a grave- which honestly was a bit weird but very cool.  One of the most unique facets of the Sumbese people is their architecture. The first thing we noticed on land in Sumba were these incredible Sumbanese traditional houses that each have a distinctive high-pitched peak in the center. We learned that these homes are highly connected to spirits or marapu, a type of ancestral religion practiced by the local Sumbese people. It was eye-opening to learn how connected these people are to their dead and how that relationship and their religious practices effect their everyday lives.

If it wasn’t for the lack of provisions and the extreme difficulty to get any necessity such as fuel and water, we’d probably still be at this mystical island. I already miss the isolation, the untouched waters and the friendly locals who have managed to maintain their traditional way of life in the face of foreign influence.

Until next time, Sumba.